This is a popular word at home the moment if you follow the American positivity movement. I am friends with various life coaches who assist you with various aspects of your life.

It is ok to want help to get the best out of your life. The struggle for perfectionism is real and it stops us from being our real authentic selves. I have recently been on holiday and found that yes I can make friends with people from completely different backgrounds as they resonated on the same frequencies as me. I know that sounds like feng Sui but there is a lot of truth with energy movement. It’s what computer scientists look into when designing websites with eye tracking software. It also what you analyse when designing a new and effective gui or graphical user interface.

I found that when people are at there most relaxed then they are more open to accepting connections from strangers that they would never come across otherwise. If you like your job, your social life and everything else is going well for you then you project that positivity onto all that you meet.

I found it odd that I met some new people who are going to be our new neighbours in a bar yet because we’re British we didn’t exchange contact details, hug/kiss, take a picture of ourselves or even do a formal introduction of my name is … what is yours?

We instead talked about general things like the airport dramas we had being involved in with me trying to outdo them which I succeeded with and then we went on to places we had been to in Mexico which we only barely connected on and finally a festival which takes place in the summer on our new road which I had never heard of despite living in my town for many years now and in a couple of different places.

In complete contrast to that I met some Americans who are lovely people and we found out there names after the initial ok look there is pina colada guy. If you get a nickname that means your onto something as your interesting and it’s immediately informal. We took pictures

, hugged, exchanged details, stayed up till 3am talking to them and had the bar close around us after the barman politely fed us pizza as we were rather drunk. We met up the next night for dinner (her phone camera is much better) 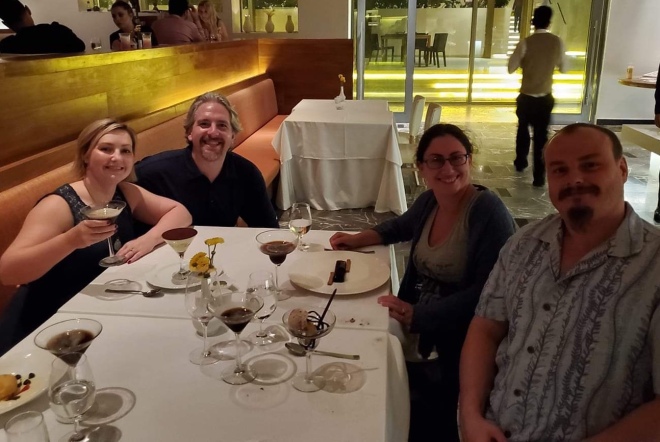 and talked some more about our lives, our likes and dislikes as will as the struggles of the day since the amount of alcohol we had consumed was considerable. It takes its toll on you surprisingly early as were all in our thirties but we can’t do what we used to in our twenties. They also invited us to stay with them in there home town. This seems to be a common American thing although these were the least American Americans I’ve ever met. It was refreshing to chat with people that just get you as that seems to be such a rare thing for me nowadays. I had to go half way round the world to find them.

The last time I felt such a profound connection I was on a cruise in the Canary Islands but with British people this time. The story of how we met is similiar but takes place over a week. It’s also ironic they were both celebrating birthdays .

They live in the uk but due to her job as an airline hostess she is often away. She travels even more than we do!

So the lesson learned here is to get out of your current negative environment in order for you to be reborn. You will find that you are doing what is necessary in life already and you already have all your required skills. You just needed to grow into a new space. Your energy has grown to the point that it fills its current container so you effectively need a new bigger pot like a plant that needs to be transplanted to allow its roots to spread once more.

I wish you all the best in what ever your trying to accomplish right now.