This city was founded by its ruler Jai Singh. He was a Hindi which is why its a pur and not a Muslim abad as I first mentioned in my post on India – Delhi (part 1). Singh means lion or warrior depending on how you translate it. Lots of people are called Singh as its a symbol of strength not a family name which you might think given its popularity.

I really enjoyed the orderliness of Jaipur. It was one of the first cities to be organised on a grid fashion. I think it was the first in India. Jai Singh was into maths, physics and astronomy. To do this on a regular basis he built the most amazing astronomical equipment. These utilise the sun as opposed to the moon which makes it different from anything else that I’ve seen or heard of before.

Indians also seem to enjoy playing chess as there are an amazing amount of chess boards about in the hotels that we have been staying in.

This was one of the best that I have come across. It was very confusing though with elephants and camels instead of the usual pieces.

I went to the City Palace in the town centre and learnt that Polo that most English of games actually came from India. Jodphur which is nearby is where the trousers come from for playing the game. There are also 5 different types of pyjamas which is another Hindi derived word. I also learnt that while the Sari is Hindi, the shalwar kamneez which is the other outfit that you often see women wearing is of Muslim (Persian) origin. It’s a lot simpler to wear and requires a lot less cloth so is better for children. Jaipur has lots of places you can go to like we did to get clothes custom made for you. My husband got a shirt and my father in law did too. Our driver had recommended that Jaipur was the best place for shopping and it certainly seemed a good option from the limited time I spent there.

We also went to the Amber Fort on the hill which is built on 4 levels each with increasing privacy and seclusion.

There are 12 apartments for each of his wives that he could visit separately without the rest of them knowing so that kept harmony.

There was also a harem of about 200 women hidden from view behind a screen that allowed them to see court proceedings without being observed themselves. 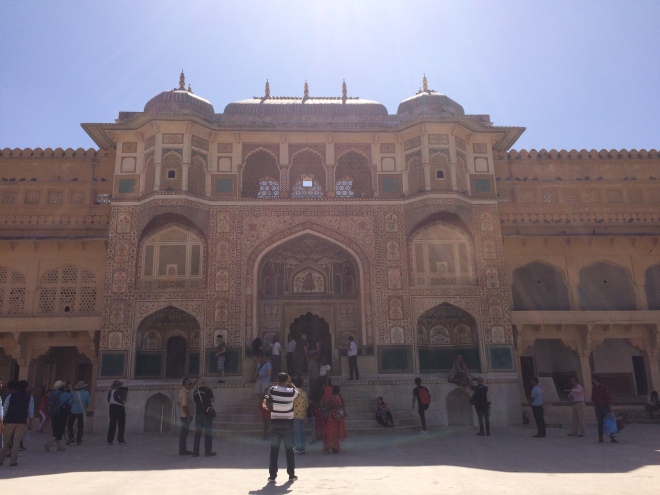 There were gardens to appreciate nature without going outside the fort which is always good for your mental health. 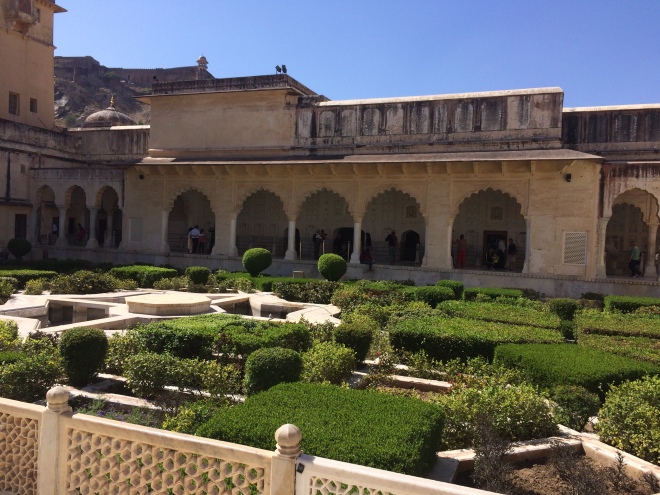 The architecture with the designs on the tiles and the artwork is phenomenal wherever you go in India as they really had some good artisans in those days.

They also have an art gallery inside that me and my husband wanted to visit but my in laws were quite hungry by this point so we left. There is always many salesmen that you have to avoid so photo opportunities have to be carefully managed.

While I was there I participated in Holi which is the Indian festival to celebrate the Spring. 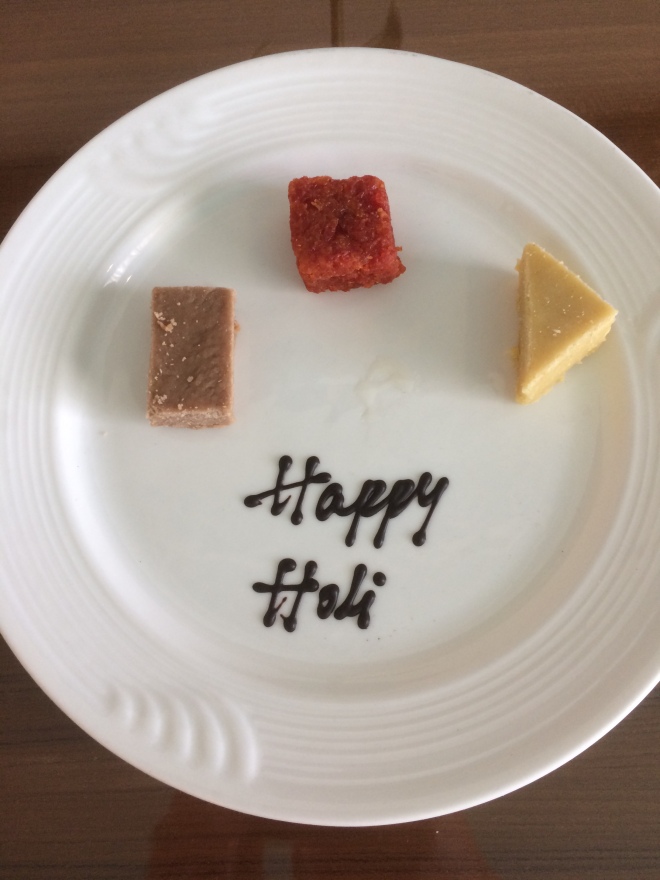 A bit like our Easter. Holi is known as the festival of Colours as they get hold of them very cheaply and they are extremely bright. The red is the worst to get to get out of your skin as it takes a couple days. Water is also part of the festival so expect to get wet if you are a young girl. I got absolutely mobbed and needed my husband there to protect me as they like to give out hugs and take selfies with you. The hotel warn you that it isn’t safe and when you still want to go out, they tell you the wrong direction to protect you. A taxi driver found us and corrected this. He took us to the main area and waited while we proceeded to walk and become living artworks.

They really like peacocks over there as they turn up everywhere.

To look at all my Indian Adventures see here