I have just been to the Indian subcontinent on a 2 week trip to take in many of the world renown cultural and historical sites that are spread around. I was extraordinarily lucky in that Covid 19 only affected the later part of my trip in Goa and Mumbai. I am now home having got what was perhaps one of the last planes out of India before they started to shut everything down.

I flew into Delhi to start my exploration. Our hotel was a heritage hotel (there called Haveli’s like ours was) in the centre of Old Delhi. Inside there was many pictures of the renovations that had taken place to turn the building from a wreck to the stunning place that it now was. Your greeted by refreshments, the red dot is applied to your forehead as a welcome and as a precaution due to Covid 19 you have your temperature taken. Then you have the forms and after being handed your key left to your own devices as the restaurant timings have already been explained to you. For yours and there entertainment in the evenings they fly kites which you can see being demonstrated on the roof at sunset.

They also do pigeon racing which is explained to you. From the roof I got an excellent view of the city sprawl.

Later in the evening they have traditional music 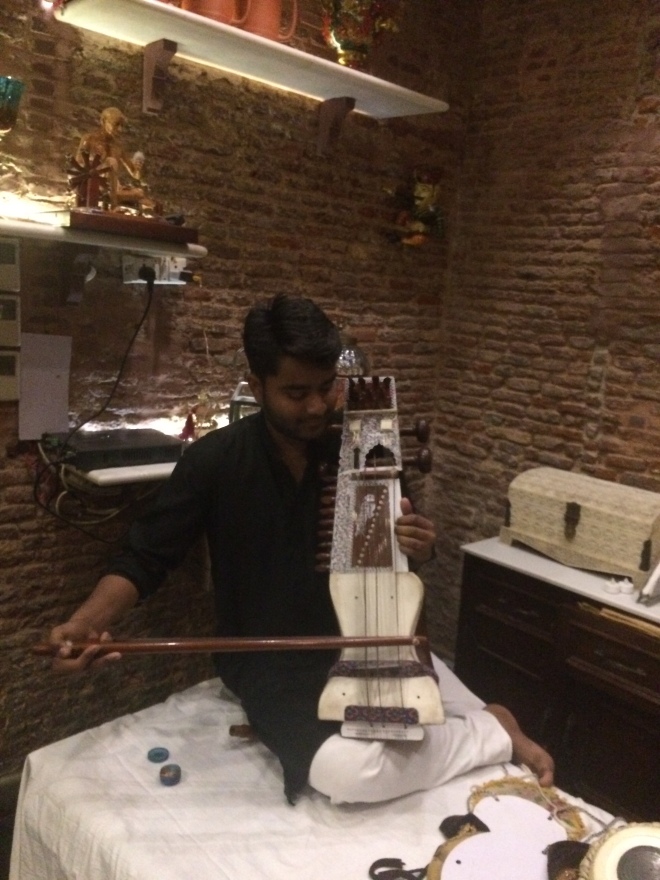 Life in Delhi is loud as you soon learn. The often repeated phrase, “In India you need 3 things, Good horn, good brakes and good luck.” is understood pretty quickly. On the back of every vehicle it says Horn Please! or Horn not OK to indicate the drivers preference. The streets of Delhi are narrow

so walking is an art form as you have to dodge all many of transportation and people selling to you on the street. The roads are congested and there is no such thing as a bus stop or bus station. You just get on or off the bus at a traffic intersection. Pedestrians have little fear of death here as at every junction you will get children miming they want food for there younger siblings, people trying to sell you trinkets or most surprisingly lady boys trying to advertise there services. I didn’t think you would get groups of men dressed in Saris walking the streets. The guide told us that frequently European men who have had too much to drink can’t tell the difference until much later and then they have to pay to quickly get rid of them so it most be a thriving trade.

I visited a Sikh temple (there are approx 10 across Delhi), while I was there and you have to keep your elbows and knees covered as well as your head. This applies to men as well as women so they sell coverings just for this purpose. Alternatively bring a scarf like I did. You have to be barefoot as well but there is water later on to clean the dust away. You can’t take pictures of the insides of the temple but its marvellous.

I found the kitchens amazing in that they cook for hundreds of thousands of on daily basis. The poor of the region get there 3 daily meals for free as well as being able to spend as much time there in quiet contemplation as they liked since there were no set services. You can volunteer to cook there as my mum did and its open to all regardless of colour, creed, race, heritage, religion, age, wealth. The rich sit with the poor cross legged on the floor eating the same food but its funded only by those that can afford to contribute. They feed you until you are full and Indian food is surprisingly filling, allowing you to take your leftovers home with you as its like the Indian Welfare State they are providing here. There were several sittings a day and it was never empty. They never ran out of food and only rested for a couple of hours at night to make sure that they could complete there never ending duty once again the next day. We didn’t eat there as we didn’t have time to wait but the goodness of these people is astonishing.

Talking of kindness we visited the Mohandas Gandhi memorial gardens and they have a flame there that is tended so that it never comes out. Mahatma is a title that is given to Gandhi to show reverence to all that he achieved for India peacefully. Its lovely and peaceful which is a complete contrast to the bustling metropolis that is New Delhi. They are side by side with Old Delhi also being referred to as Shahjahanabad. This is because the city was found by Shah Jahan. He was a Muslim so the city has abad appended onto the end to indicate that its not only his city but an Islamic one too. If it was Hindi it would be pur on the end like Jaipur which I will talk about later.

We also visited Humanyun’s tomb which is a magnificent building in the Taj Mahal (Crown palace) style.

This is a striking contrast to the rest of the buildings that people live in on a daily basis. The mughuls that lived there are descended from the Mongolians and its where we get the phrase media mogul from to indicate how much wealth someone has accumulated. The palaces are full of marble and inlaid with precious stones. They have gardens and fountains to replicate the heavens as the word paradise comes from a walled garden.

They had more wealth than the average person could gain in a thousand lifetimes as the average life time income after 50 years was £2.

Chandri Chowk is a street that you will pass by often if you are exploring the historical district and it means Moonlight street. This is connected with the daughter of the ruler at the time. There were 5 Shahs that you will hear about when you are driving between the different attractions and if your guide is anything like mine was, it will be information overload. I loved hearing all the history and the word origins as I’m a bit of a word nut as you may know.

There are many temples (Sikh, Hindu, Buddhist etc) in Delhi as you might have guessed and as we were walking about we came across a Jain temple. These are strict vegetarians and have rather odd rituals for their priests during celebrations. They are in fact not allowed to wear a stitch of clothing and therefore the family surround them so that nobody is embarrassed by this. This parade happens from the temple to the family home so it can go on for quite a while. Luckily I didn’t see this but I was reliably informed by my guide who was turning out to be extremely well informed on everything to do with Delhi’s monuments and history.

We passed by the India Gate 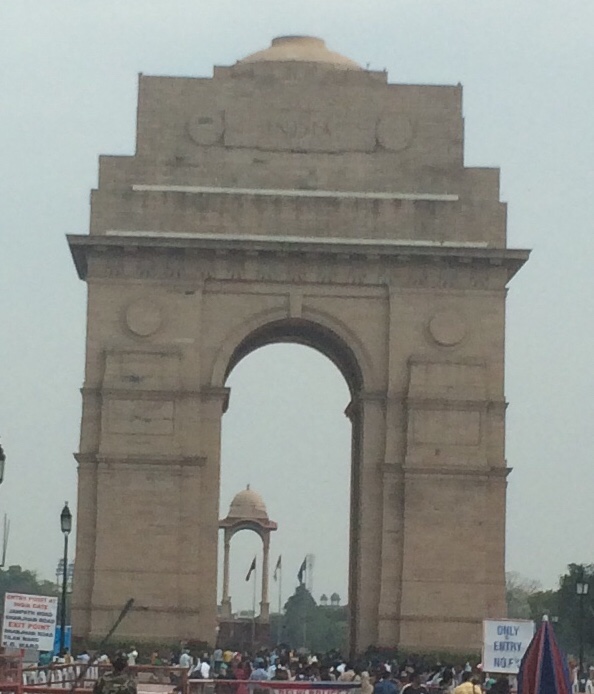 which was built by Edward Lutyens (who also designed the gardens in Sandwich, UK amongst many other things). He also designed many buildings in Delhi which were beloved by William Dalrymple but sadly are gone now. I read some pages of an amazing book by him (A City of Djinns) provided by the hotel but I didn’t get very far and it didn’t seem right to take it with me. I wouldn’t have had time to read it much anyway as the time was so packed with places to see. I got to read more about the East India Company later in a hotel magazine in an article written by him.

The Red Fort that acted as barracks for the soldiers in Delhi has apparently been hollowed out by previous occupants so we saw the one in Agra which is amazing. More on that later as the next stop is Agra which is home of the Taj Mahal!