This is a German style of art from the turn of the 20th century. It is a reaction against the horrors of the First World War. It was trying to create a new society as the old one had been so thoroughly destroyed. Old habits have a habit of creeping back in though so it wasn’t long before the attitudes of the older tutors started to corrupt the ideas of the younger generation.

The women who attended were soon segregated to the weaving department and this led to development of innovation in the world of thread. Annie Albers developed fabric that could be used for sound proofing that was much better than what was previously in use. This was mentioned in the covering program by the BBC as well as in her own program. Her work was recently exhibited at the Tate too.

After this input I had to visit the original Bauhaus exhibition when I went to Berlin. It was wonderful to learn all that I could about the preliminary exercises, the tutors and pupils, the locations and the effect that it has had on the world of design since. It has made me realise that as much as I think I’m innovative, everything truly has been done before. Therefore it’s freeing to know that I don’t need to try to reinvent the wheel in my art or photography.

I liked the idea they had of exploring colour, paper, light and shade like you had never used them before. It was the throwing out of everything you knew before to start afresh. I have been doing this over the course of the past year at least to explore where I need to go with my artistic projects. This is in conjunction with my therapy to understand myself and the world better.

The folklore museum is a continuation of the history of Lefkás from where the Archeological museum In Lefkás Town finished. As you may recall I said previously that there was a big gap in the history of Lefkás from when the Romans left until the Venetians turn up in the 15th century. Other museums in Lefkás details other aspects of Lefkadian life but these are based outside of Lefkas town.

The folklore museum covers the period from the Venetians in the 15th century, through the Ottoman Empire, French, British and finally when they are free to rule themselves. There is also Santa Maura fort Lefkás if you wish to see the result of these battles.

At the start, it documents the newspapers, geography and men’s occupations like the ball game they used to play which is like boules. It also talks about the activities of the market place or the special events of Easter and Faneromeni which is coming up on Monday 17th June.

The emphasis here though is very much on female life as the are drawers upon drawers of women’s clothes, there is household linen and how it was made in the first place, carpets, examples of food that they ate including information about wine, olive oil, Eglouvi lentils and bread.

It also shows upstairs the setup of a typical bedroom and dining room. There is a loom on display that they would have used so that clothes could be woven. It details the different types of dresses worn by a girl, a bride and a woman as well as Sunday dress. There differences between rural and urban ladies are listed on the wall with what was expected of both. It also talks about the dowry that went with a girl upon marriage.

In the very last room is a music room with pictures of Aristotle Valaoritis, Angelos Sikelianos and Agni Baltsa. This is to complement the bouzoukis you see in the entrance hall. For related musical posts see here:

For examples of my work see here Series links.

This is a very interesting place to visit if your interested in the prehistory of Lefkás. It also covers the findings of the excavations of Wilhelm Dörpfeld even better than the Fagotto book that I mentioned previously Wilhelm Dörpfeld.

In this museum it goes into detail about the ancient and goddesses (Apollo etc) that were worshipped on the island and how Lefkás became associated with Sappho and unrequited love. It explains the temple that was once there and how the inhabitants worshipped female deities.

In another room it details the lengths that they went to in order to honour their dead. It contains grave goods and headstones along with descriptions of the different styles of graves.

In the main room it contains information about the basics of Greek life like bread, wine, oil, fishing, weaving, music, houses and coinage (trade). It also includes interesting language facts and all sorts of other things that you can’t find out anywhere else.

In the last room it houses all the finds from the Dörpfeld excavations along with an examination of the time period that they relate too.

It takes the average person less than an hour but I spent an hr and a half because I read everything in sight. It also costs €2, is closed on Tuesdays and you can’t take the leaflet away.

I know I’m making this sound so dull but I was fascinated by the content. It gave me a lot of insight into why Lefkás had a lot of settlements and activity for a vast period up until the Roman period. After the building of Nikopolis which I will talk more on after I have been, the decline was evident especially when the battle of Actium happened. This was a famous sea battle between Cleopatra and the Roman Empire.

After that Lefkás disappears from history for approx 800 years. It’s only when the Venetians turn up that things start happening again but that’s beyond the scope of the museum. 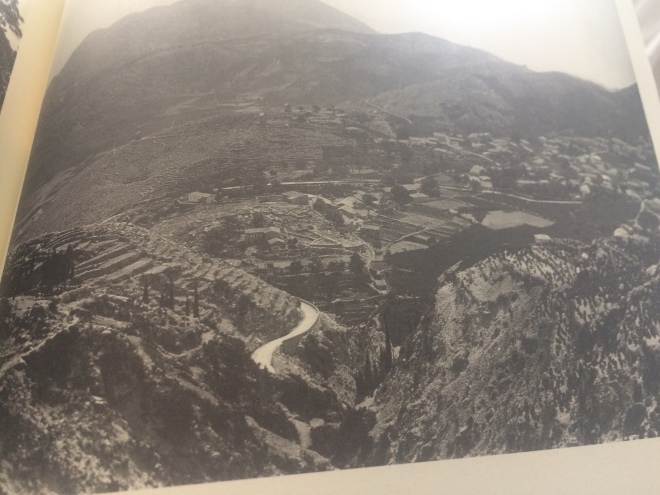 This is a small village well known for its embroidery. It has a style unique to Lefkás invented by a lady called Maria Standraka who was unable to stitch in the normal way due to an acquired disability. She came to be known as a Koutsochero because of that disability. Not to be defeated by this obstacle she came up with the Karsaniko style. There are samples of her work displayed inside for you to admire. Ladies here to this day practice it but it is a dying art I believe due to the age of the practitioners. However it’s being kept alive in the internet age by there being a video on YouTube and images on Pinterest. So all is not lost here just yet.

This is similar to the article that I wrote on Eva Palmer Sikelianos who practised weaving and the art of making all of your own clothes by loom.

I haven’t managed to view this yet but I’ve passed by it many times even eating in the village itself. It is well known for its rugs. The Wikipedia article isn’t very helpful here as it makes no mention of anything I have said in this post. Karia.

Do you have any unique artisanal workmen and women in your cultural history?

I like making series and connecting my posts together so that they make sense to you the viewer and reader. This is the first part of my rural Lefkás village series.

Other series include Greek poets, authors, Musicians, Famous Greeks and Foreigners who have become interested and or benefited Greece in some ways. All the links can be found here Series links.

She was born in New York, emigrated to Paris and here she met her future husband Angelos Sikelianos . She then became his wife and moved to Lefkás to live there and learnt weaving of which there are examples of in the museum.

She famously said according to the Angelos Sikelianos museum “I decided that I would never ever wear another thing made by a machine again!” Proceeds to throw a trunk full of couture clothing from Paris out of the train window.

She was also friends with Nikos Kazantzis and George Serefis. Angelos and Eva lived together in a house in the south of Lefkás as well as the one in Lefkás town that houses the museum you see above.

She was responsible along with her husband for the 1st and 2nd Delphic festivals but these were to prove the undoing of the couple as the economic cost was too great.

She also helped to revive and prevent the loss of some of the weaving techniques for her clothing. She taught them to Angelos’s second wife Anna Karameni when she was finally able to return to Lefkás just before her death in 1952. Anna lived to be over a 100 dying in 2006.

She is part of my foreigners who helped Greece series:-

Other series include Greek Poets, Authors, Musicians, Famous Greeks and Rural Villages in Lefkás. All the links can be found here Series links.

Do you have any notable power couples from the past in your country?